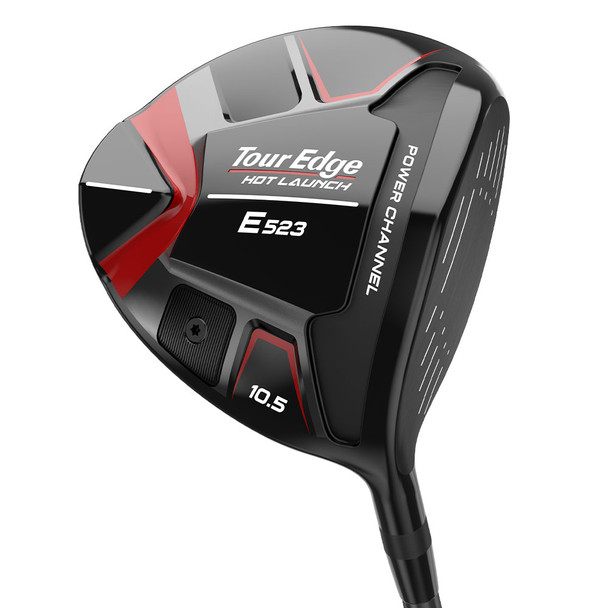 The Extreme Game Improvement Hot Launch E523 Driver is designed to be the easiest driver to hit in the market for slower to medium swing speeds.

Every aspect of the E523 is focused on improving launch and accuracy.

The 460cc Titanium driver is incredibly stable at impact thanks to its extreme Moment of Inertia (MOI) properties. The technology built into the E523 Driver is all about easy launch, consistent playability, and maximum forgiveness across the entire face.

Houdini Sole Technology - The Houdini Sole includes an area of mass concentrated on the trailing edge of the sole of the clubhead, as well as a curved leading edge under the face. This unique and patented design allows engineers to precisely position weight in the head for an ultra-low and deep CG, optimizing launch conditions and greatly improving stability.

High Moment of Inertia – An extremely high MOI makes this driver an extremely stable and powerful weapon off the tee. This increased MOI will improve ball speed on miss-hits and will keep shots straighter, while the back and low CG positioning creates high-flying, powerful tee shots.

Power Channel – The Power Channel on the sole of the club behind the face is new to the E523 Driver and provides a myriad of performance benefits. The Power Channel distributes weight to promote increased face flexing, amplified ball speed and less spin, as well as added forgiveness on shots struck lower on the face.

MSRP:
Now: $95.00
Was:
Make Every Day Playable with FJ Performance Outerwear Take the wind out of play. FJ Sport Windshirts provide outstanding comfort and protection on the golf course during windy playing...

MSRP:
Now: $240.00
Was:
Make Every Day Playable with FJ Performance Outerwear This HydroKnit Pullover is constructed from advanced materials that deliver 100% waterproof, breathable protection for golfers in...